My daughter was sooooo excited for Dapper Day. She got up bright and early to get ready. She loves dressing up, and has so much fun! She does the Fall and Spring Dapper Days at Disneyland each year and always looks great. Today was no different. She looked adorable. Here is a photo of her with our rental car! They matched! It was nice having such a bright colored car – easy to find in the parking lot. 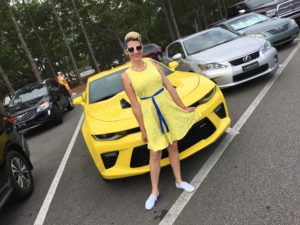 Car matched Joy’s dress. Too bad the car was a lemon

Anyway, she got up early and got ready then woke me up. I surprisingly felt pretty rested. We decided to drive today and park our car at the TTC. We were only planning on going to Epcot and MK and they are both connected via monorail – this way we can leave a little later, and have the car to take home at night. We packed our backpack with a change of clothes/shoes/wipes, antiperspirant, etc so we could clean up a little before we headed to MK for the evening. We each grabbed a banana and a bottle of water and headed to the car. We were going to grab something at the food court but then remembered all the yummy treats at Epcot and decided a banana would suffice.Left the hotel about 9:30.

It was a very quick drive to the TTC, got a decent parking spot, too. We hopped on an almost empty monorail over to Epcot. We arrived, went through security and through the whole entrance area and were standing by Spaceship Earth at 10:10. We had a fast pass to ride it, the window started at 9:35 so we walked on. No line. Its a long ride, and relaxing and cool inside – kind of wish we would have gotten a fast pass for later in the day, would have been a nice way to cool off. After that ride it was almost time for our Test Track fast pass, so we wandered off in that direction. Guess who is one of the characters in the Innovations Bldg??? None other than Joy! The line was super long and we didnt want to miss our Test Track fast pass so we agreed to come back later. 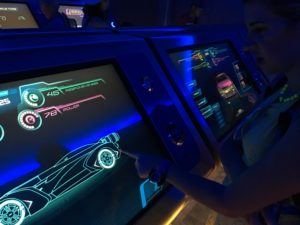 Test Track has a new line experience since our last adventure there 9 years ago. You get to design your own car. My son would have loved this!!! You get a report with specs based on how your car performed. We went for pure power! Our car didnt do so well in handling, or efficiency, but we were #1 in speed! Yay us! It sure was fun!

The Seas with Nemo was next. Adorable!!! Then off to see all the aquariums. My favorite, the manatees were sleeping and not moving around much. Still we got to see them! The aquarium buidling was not crowded so we got to see everything. It was fun watching the little kids try to find Nemo and Dory in the tanks. There was one little boy who was watching ‘Peach’ and hoping she would do something. Not sure what he wanted her to do, but he kept telling his dad to wait – he wanted to watch Peach. I felt bad because that seastar was not going to do a thing.. Now we were hungry!! Since we were over in this corner we went back over to Sunshine Seasons. We both felt like having a salad, probably because it was hot and humid out. My daughter got an ahi tuna salad and I got a caesar salad with chicken. Both were very good! Then of course we got a cupcake for dessert. Yummy as well! We filled up our water bottles and headed out to go see Joy!!

The line was long, but not as bad as earlier. We waited about 30 minutes. Several others in line were also dressed as Joy (but none were adorable as my Joy). It was so cute watching the interaction between Sadness, Joy and my Joy! They were so excited to see my daughter. Her dress was the same as Joys – they compared shoes, and just had a great time together. This was one of the better character interactions I’ve seen. We took photos, Photopass took photos – they are all adorable. Here is one! 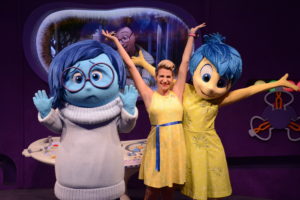 Time to go explore through the countries. We still had the backpack that we’d been dragging along. I originally thought we’d do our fast passes and then run over to the countries, so we chose to wait to get a locker until we were back there.. There are lockers by the International Gateway entrance. On our way to the locker area I found the perfect gift for my son and his girlfriend. She is from Canada and they are visiting there this summer, I got them matching Canada t-shirts 🙂 Stuffed them in the backpack, then we went over and got our locker. It was $14.95 for the day. $5 of it was for the key deposit. You get that back when you return the key. If we want a locker later at MK all we have to do is show our receipt, pay another $5 key deposit, and we will be given a locker. Easy!

We love the countries, and exploring all the little shops. My daughter wanted to buy cologne for her boyfriend, so we checked out the store in Paris, but ultimately she bought him some in Italy. Smelled yummy! We stopped in Japan (my favorite place to shop) and bought a bunch of stuff, including some pearls/pendants for moms for Mothers Day. Got a bunch of fun candy, and all sorts of fun items. Breakable stuff was shipped home, other stuff was sent to our resort. We worked our way over to Norway where we planned to get some pastries for a little snack. We got here a little later than I had anticipated, but we still got something! We git the Schoolbread and a berry cream puff – both were excellent!!!  After this we made our way back through all the countries – on our way we happened upon Sadness, Fear & Envy. They had been looking for Joy all day long! They were so excited to find her! They took a photo together 🙂 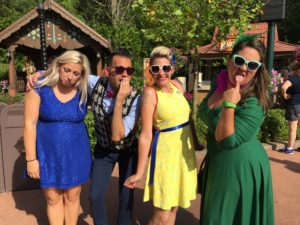 Next we grabbed the backpack, worked our way up to the front of the park. I changed clothes, and Joy added leggings under her dress and we set out to the TTC! No line at all to get on the monorail. Short ride to the TTC. We hopped off and ran over to the car to dump the backpack. We could have definitely done without the backpack. We could have just changed at the car. No one was out in the parking lot at all. Live & Learn! We also moved the car up to the front of the lot for an easy exit later. Then back over to the monorail station to head into Magic Kingdom. As we were walking up the ramp to the monorail they gave everyone some Fast Passes that were good for any ride, but expired that night. Nice little bonus 🙂

We entered Magic Kingdom just as the parade was finishing up, so we walked along side it on our way over to Buzz Lightyear. We had a fast pass for it, and since we had time, we rode it. I was super disappointed. The ride is not the same as at Disneyland. Their guns are stationary, and there is no noise or feeling in the gun when you get points. It all felt very different and we didn’t like it. I like the feedback so you know when you’ve hit a target. It was hard to tell where you hit. This ride will be removed from our list. It was not fun at all. I sure hope that they don’t ‘upgrade’ the one at Disneyland. I guess that’s one way to shorten the lines, make the rides suck so people don’t want to ride them. haha But our disappointment didn’t last long – now its time for our WISHES DESSERT PARTY!!! 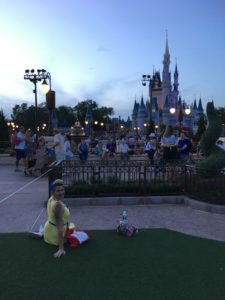 I planned this as surprise for my daughter. I chose the one with the garden viewing, which in my opinion is the way to go! You get the dessert buffet experience, and then you get a prime spot for the fireworks! The grassy area right in front of the castle (in the hub area). There was plenty of room for everyone, in fact people were laying down, kids were running around, it was fantastic! We got a spot in the front of the grassy area and my daughter connected her flexible tripod to the fence so she could video Wishes! It was the most worthwhile ‘extra’ – not only did we get some yummy desserts, we got a prime spot for our viewing of Wishes!! We met some nice people and thoroughly enjoyed the show! The look on my daughter’s face was precious! Worth every penny! 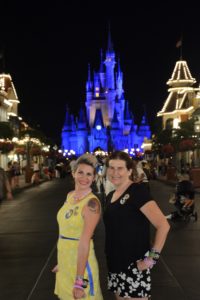 On Main Street as the park was closing

After the show we didn’t want to rush out. It was still early. We ran over to Adventureland to do some of our Sorcerer game. The park is closed, but the portals still worked. We did a few of the challenges. It was really fun. We took a bunch of castle photos, found every single Photopass person on the way out and took photos with them all. Each had a little different vantage point, so the photos turned out great. I really wanted to get some popcorn but I was so full. We ate a bunch of crap today, so I resisted. Instead we just followed the crowd out of the park. As we left, “It’s a Small World’ was playing in the background – a perfect end to a perfect day!

We took the monorail back to the TTC and our car. We found a Taco Bell that was open late and got some dinner. Yes, it was late, and we were not really hungry, but I felt like we needed some real food. Taco Bell is cheap, quick and yummy! After that we went back to our room. It was a long day!! 23,697 steps! Guess what? We passed out as soon as our heads hit the pillow. We’ve had two amazing days so far – magical days!